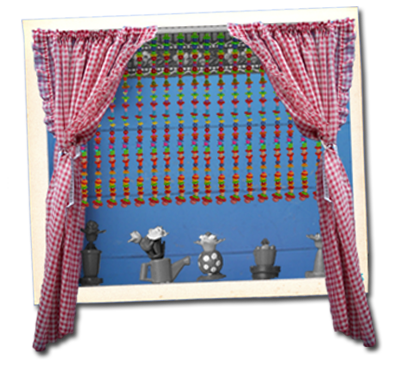 BEAD CURTAIN
You need:
–    loads of beads. -If you don’t have beads you could cut up some old necklaces or bracelets you never wear-
–    a needle for threading the beads
–    thread
–    a pair of scissors -otherwise you have to bite the threads and that’s kind of undesirable especially so in case you have braces because you might damage something and then you’ll have to go to the orthodontist’s and that’s gonna be costly and that man is rich enough as it is, I mean did you ever see that red sport scar of his and did you ever notice he’s got a suntan all year round?-
–    a sturdy cord for hanging your threaded beads from.
–    two of them little screws with a little eye to hang up the curtain once it’s finished
–    measuring tape
Step one:
Think about where you want to hang up your curtain. This is very important because you have to know how long curtain has to be.
Step two:
Measure how long the curtain has to be.
Step three:
Cut a bunch of threads in the right size. Now I cannot tell you how many since I don’t know what the size of your window is, now do I? Tie a knot in all of the threads so as the beads don’t go falling off.
Step four:
Using a needle thread the beads.
Step five:
Hang up the cord from which you can hang your bead curtain. Now you have to kind of figure out yourself how to best go about this because I don’t know what your window looks like. What I did, is I just screwed in two screws in the woodwork of my window and then attached the cord to the two screws. Now, I know it’s easy for me to talk because nobody really ever complains when I do stuff like that. My mother doesn’t mind because she is dead  and I haven’t been in touch with her since she died. My husband doesn’t mind because he ran off last year because he fell in love with the orthodontist, I had suspected something was amiss for awhile since he insisted on getting braces even though he’s had a set of false teeth ever since he was twenty, but I have to tell you I got still rather upset when I followed him one day and found him kissing the orthodontist.
Step six:
One by one tie each thread individually onto the cord.
Step seven:
Sit back and relax and enjoy your view.