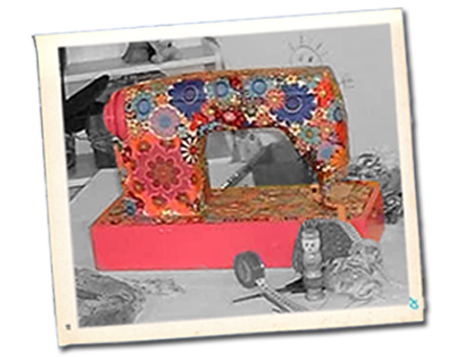 FLORAL SEWING MACHINE or VASE
You need:
–    one old sewing machine or vase
–    fabric with a floral pattern
–    wallpaper glue
–    varnish
–    a brush
Step one:
Keep nagging until you get someone to donate a sewing machine or vase. Please realize the sewing machine will be useless once you’re through with it so in order to get a hold of one you might have to lie about this and then later pretend you didn’t know but I don’t think that’s such a hot idea because someone is bound to get pissed if they don’t understand anything about art. The vase is no problem, you can still use it once your project is done, so at least you won’t have to lie and cheat about that which is always for the best. Lying and cheating don’t get you anywhere usually I know this for a fact.
Step two:
Cut out looooooooooaaaaaads of loose flowers out of the fabric. The more different fabrics you use, the better the effect of course. If you get a pain in your wrist from cutting too much it’s best to take a little break. Go eat a Mars-bar -but make sure you brush your teeth afterwards- or sing the National Anthem of your country for a while.
Step three:
Prepare your wallpaper glue according to the instructions on the package.
Step four:
Cover the sewing machine or vase with wallpaper glue. You know, you could also take a completely other object for this purpose, in fact you could use just about anything. Except for pets pretty much anything goes. The wallpaper doesn’t really stick well on a furry pet, but I must say I’ve never actually tried non-furry pets such as goldfish. Still, I think you’d better stay clear off pets since people tend to get attached to them and might think it’s unethical and stuff like that and you don’t want to end up in Reform School.
Step five: Cover the flowers in glue and stick them on your vase, sewing machine or the object of your choice as long as it’s no pet one by one until you have completely covered the surface.
Step six:
Wait until the glue has dried up completely. This may take awhile, something like a whole day or something so don’t just keep sitting there waiting but go do something useful while you wait:  How about a game of snooker or clipping your toe-nails or watching a documentary about the Spanish Civil War or memorizing the alphabet backwards.
Step seven:
As soon as everything is dry, your project is finished. If it came out sloppy or ugly you might want to consider giving it to someone who has bad eyesight and won’t notice anyway. If it came out well enough you might want to give it to your mom or anybody else you need to impress but you can also keep it yourself, that’s up to you.