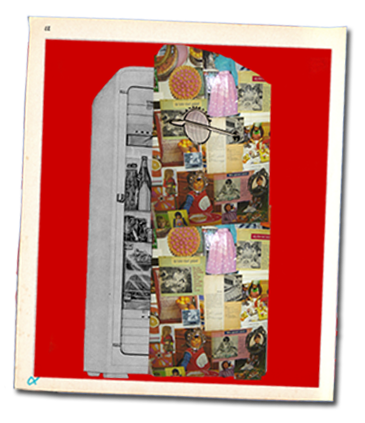 PIMP YOUR FRIDGE
You need:
–    one refrigerator
–    a whole bunch of pictures you’ve cut out of magazines
–    wallpaper glue
–    varnish
–    a brush
Step one:
Convince your parents or legal guardians that it is of the utmost importance to pimp up your fridge since everybody in school has a pimped up fridge at home and you don’t want to end up being unpopular just because your parents have no sense of style. Try to scare them by saying you might become so unpopular you could end up being depressed or in need of expensive therapy. Also, remind them your self-esteem might get so low it’s likely you’ll never move out of the house, that usually works wonders.
Step two:
Cut out pictures until you’re blue in the face. Find pictures in magazines you like. You could try to find pictures which are all the same theme such as cats or flowers or liverwursts or hamsters or sunrises. It’s best not use dirty pictures such as pictures showing bare bottoms, breasts or penises since The Average Parent or Guardian probably draws the line at having a refrigerator covered with private parts.
Step three:
Prepare the wallpaper glue according to the instructions on the package.
Step four:
Cover the fridge with wallpaper glue. Use your hands because it’s more fun.
Step five:
Cover the pictures with wallpaper glue and stick them on the fridge until it is completely covered.
Step six:
Count to threehundredbillion until the glue has dried.
Step seven:
As soon as the glue is dry you can varnish.
Step eight:
Once the varnish has dried you’re done and you will have created the most beautiful fridge in the world.