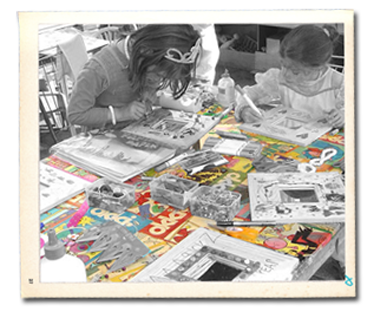 project: OKKI-table
YOU NEED:
–    one ugly old table -if you don’t have one, perhaps you can talk your grandma into giving you one or just ask around to see if anyone’s got a spare and ugly old table around and if all this fails you may have to resort to stronger measures such as ruining your mother’s table –for instance by painting on it- in such a way that it becomes useless. Just make sure you do this about a week before you start on your project or she might suspect something.
–    loads of wallpaper glue
–    a big pile of old Okkis. Now this might be a problem for you if you happen to be living outside The Netherlands. Don’t worry about it, it’s not your fault, billions of people live outside The Netherlands and you can still do this project using a pile of other old magazines.
–    an old towel or a roll of kitchen towel to wipe your hands with.
–    a brush for applying the varnish
–    varnish
Before you start:
It’s best to carry out this project outside because it can get real messy which is the most fun and it’s easiest to take of all your clothes while you’re working as well. If you happen to live in Alaska or Siberia you might want to work inside or wear a snow-suit and if you have any concerns or hang-ups about public nudity you may also want to work inside or wear your bathing-suit or something. Just don’t come crying to me if things get too messy.
Step one:
Make sure you scrape off any dirt such as bird-shit or food that’s still stuck to the table.
Step two:
Rip the front covers of your magazines and put them on a pile. You need about a million of them because you need about two or three layers. If you don’t have enough front covers you can use any old page, just make sure you first make a layer with the any old pages since the first layer will be covered up anyway, you know what I mean?
Step three:
Make a lot of wallpaper glue. It tells you how to make it on the package so I’m not gonna sit here and waste my time telling you how to make it.
Step four:
Cover the top of the table with wallpaper glue -you don’t need to cover the legs unless you want to decorate them as well-. It’s best to do this using your hands because it’s faster and more fun but if you are finicky about getting your hands dirty and stuff you may also use a brush of course. Make sure it’s a big one though otherwise it’ll take you three years.
Step five:
Cover the magazine pages with glue and stick them on the table until it’s completely covered.
Step six:
Put another layer of magazine pages over the first layer.
Step seven:
If you’re not bored yet you might put on another layer, but if you’re bored, just stop. After all, you’re doing this for fun.
Step eight:
Pretend like you have fainted from all your hard work and try to get your mother or father to clean up your mess for you. If this doesn’t work you might have a younger or dumber sibling you could blackmail into cleaning up for you. Be resourceful. Just realize there’s a lot at stake because if you fail to lay this work on anyone else you’re gonna have to do it yourself.
Step nine:
Go do something else now like catching a fish in a nearby river or playing Ping-Pong or memorizing the Greek Alphabet or taking a holiday abroad. Whatever you do, just make sure it keeps you busy for awhile because the table needs to be completely dry before you can continue with step 10.
Step ten:
As soon as the table is dry you can apply a layer of varnish to it. For this you do need to use a brush because it’s kind of hard getting varnish off your hands.
Step eleven:
Once the varnish is dry, your table is ready for use. -see picture-