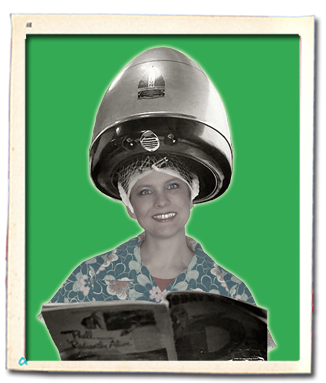 AUNT GERTRUDE’S CRAFTS
The doctor told me to find a hobby on account that I had to try to lay off the sherry a bit because I was kind of very addicted to sherry and sherry happens to contain alcohol and that happens to be rather unhealthy, alcohol I mean. Especially when you are in the habit of drinking it by the gallon it is said to be unhealthy. I’ll tell you what is so bad about it straightaway just in case I’m your Big Idol and you want to be like me. Don’t. Sherry is bad for your skin -gives you a red nose which looks ridiculous- and it makes you smell -like a drunken sailor in a dress- and it also makes your speech blurred and you often end up saying painfully stupid things which can get you in trouble loads especially with The Elderly, The Religiously Righteous and Traffic Cops.
So I first tried going to the gym as a hobby but this didn’t last long since I couldn’t wear my apron to the gym and I happen to always wear aprons. I like aprons. What happened is I would keep getting stuck in these machines all the time and the Gym Instructor would have to come over to pull me out with a pair of pliers which annoyed him greatly since it kept him away from instructing them Cutesy Types, you know with Bleached Hair and them shiny and tight lycra pants and also it got so bad he’d need to keep those pliers on him all the time I was there which didn’t look so hot. So he kind of forced me to quit but I have to say it was a relief.
After this I tried to join a Golf Club because I have always loved to swim and float around, but believe it or not, I wasn’t even allowed to join! They sent me home the minute I arrived saying I was dressed inappropriately which was downright ridiculous since I happened to be wearing my brand new Bath Cap. It was a Major Disappointment to me I can tell you that. I mean I had bought this Bath Cap and it wasn’t even cheap or anything. For a while I kept thinking things might have turned out differently if only I had worn a striped Bath Cap instead of one with a floral pattern but the doctor told me not to worry about it too much and just concentrate on finding another pastime.
So then I went on and tried taking up Bingo as a hobby and I have to tell you I just plain old loved it right away. I mean it took some getting used to in the beginning because it’s all about numbers and I’m not especially good with numbers so I had a lot of Invalid Bingos at first but nobody seemed to hold that against me much except for this one woman who kept trying to trip me up but other than that it went fine and once I got the hang of it I won lots of prizes too like a wrist-watch and coffee and a year’s supply of liverwurst and all that but what happened is this: one night I won a bottle of Sherry and things got way out of hand after I drank it. What I did is I spent all my money on Bingo Cards because I was convinced I would win the jackpot but then I was broke and I needed money to buy me a tent because I wanted to camp out in front of the Bingo Hall to make sure I got the best seat so I went to see the doctor to see if he would lend some money for the tent but the thing is he wouldn’t. Instead he got all worried and upset and told me I had to stop playing Bingo because I had just traded one addiction for another is what he said. He said Bingo was just as bad as sherry so I told him I thought that was silly because Bingo wasn’t bad for my complexion at all and it didn’t make me talk nonsense and even though it did make me smelly because I got rather excited and sweaty I thought that Bingo had brought me many good things as well but the doctor wasn’t impressed, not even when I told him about the year’s supply of liverwurst.
So now I’ve thought of something new to keep me busy, namely Gertrude’s Crafts. I’ll be the Crafts Teacher and I will give you all kinds of wonderful crafting projects. I don’t see how I can go wrong doing this.
Before we go on I have to tell you something important first. Listen, if you are under forty-three years of age please always ask your parents for permission before you start working on any of these projects. I have to be very strict about this because I don’t want to be held responsible for any injuries you might receive. I mean what if you were to stab out your left eye or what if you like spilt some glue and then tripped over it and broke your elbow or something?
I don’t want to be blamed for you making such an awful mess of things because I have enough problems as it is without having to pay for hospital bills or being shot to death by angry parents.